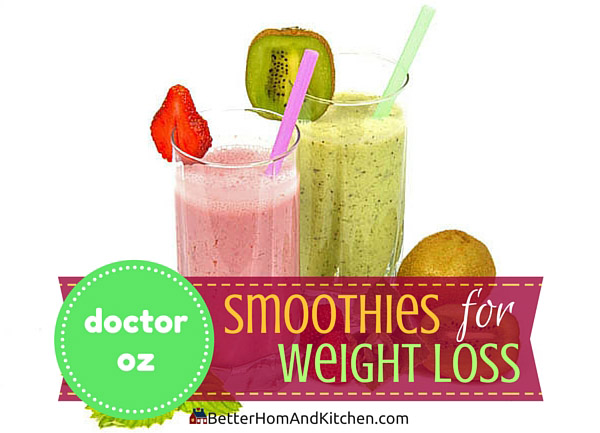 If you’re like me, you want to find a neat and nutritious way to slim down. Luckily, Women’s World came out with an article called “Dr. Oz’s Top 10 Slimming Smoothies” with recipes for weight loss.

The article goes over Dr. Oz’s smoothies that help you lose weight — by eating! It seems counter intuitive, but it really works. Deprivation doesn’t work for weight loss. I will be going over these smoothies with you.

My daughter and I have done a taste test for each of these smoothies, too. So let’s get to it! 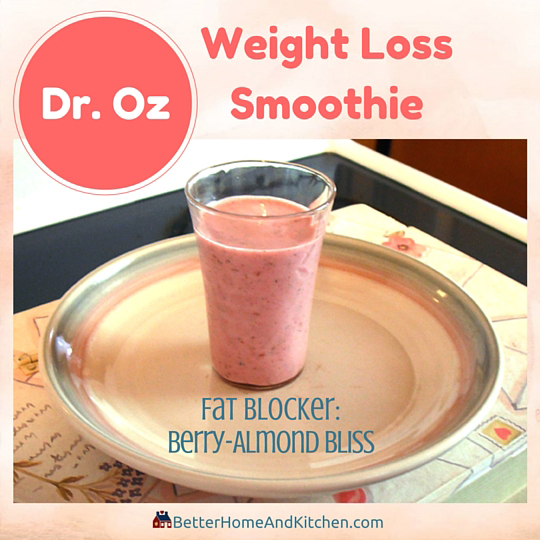 If you’re really aiming to slim yourself down, you should really try blending your smoothies with kefir.

In case you don’t know, kefir is a lot like yogurt, but with more health benefits.

If you haven’t tried kefir yet — it has some tart, sour and bitter taste.

[Kefir] has a higher probiotic content than yogurt. Yogurt has 2 to 3 strains of bacteria. . . kefir has 10.

Although you usually wouldn’t want bacteria in your food in the first place, it’s a good thing in this case.

Because there are more “skinny bugs” in kefir, it has the ability to turn off genes that store fat and take away fat absorption. These powerful bacteria give you an ultra-slimming opportunity.

Pop the following ingredients into your blender and puree until smooth:

The smoothie looked good, but it was somewhat bitter when we tasted it. We had to add some maple syrup to make it taste sweet. But adding sugar will counteract the slimming power of this smoothie.

We’re not sure why the drink tasted bitter. Before we blended the ingredients, the almond butter and the raspberries were perfectly fine, but the kefir had a slight bitterness.

The only thing we changed was making a double portion and using black chia seeds instead of white chia seeds, but that does not seem like something that would ruin the whole smoothie. 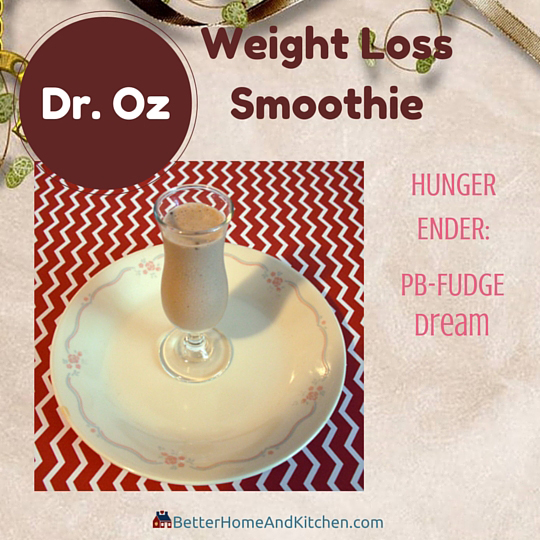 This smoothie is looking really good to me. . . Probably because it has chocolate.

Although it doesn’t seem like chocolate should be a good source of weight loss, it actually does the opposite. It adds just the right sweetness to smoothies that will keep you from craving more sweet treats.

The more than 400 chemicals in chocolate positively affect your body’s ‘good mood’ chemicals, including serotonin.

And because these ‘good mood’ chemicals are making you feel good, you’ll lose that urge to eat more and more junk food.

These are the ingredients you should put into your blender to puree until smooth:

It was a pretty tart smoothie, but that’s probably because we used plain Greek yogurt. Perhaps you might want to make this smoothie with flavored Greek yogurt instead.

The upside to this is that this smoothie is really filling! It certainly is a “Hunger Ender;” I was hungry before I drank it, and then I was completely full after just one cup! 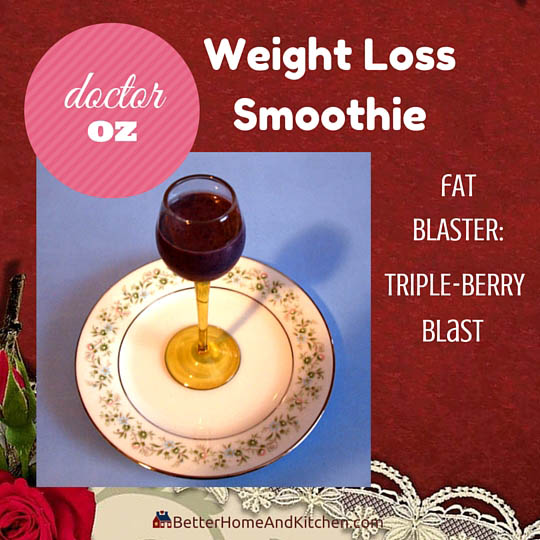 Blueberries are very delicious, and they’re very good for slimming down your tummy too!

This quality of blueberries will give your metabolism just the boost it needs to help you lose weight.

This is supported by a Japanese study which showed that women who ate a half a cup of blueberries a day lost 33% more weight than women who didn’t have any blueberries.

Puree these ingredients in a blender until smooth:

Like the last smoothie, this one was very filling. The problem was that this smoothie was surprisingly not very sweet. We had no fresh berries on hand so we used frozen berries instead.

As soon as you taste this smoothie, you might feel like adding sugar. However, once you’ve finished the drink, you lose your cravings for any sweet treats. 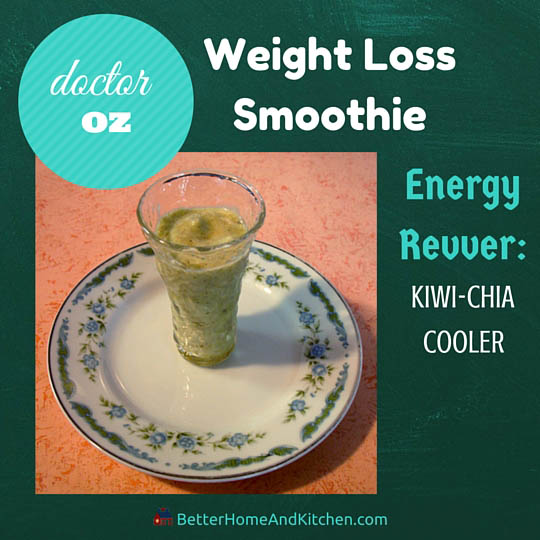 Chia seeds have the attribute of helping you feel energized to make it through the day. So it’s a good idea to put them in your smoothies.

Chia can help restore energy levels and decrease inflammation because of its omega-3 fatty acids.

Basically, chia makes you feel like you got a brand-new set of batteries.

The fatty acids in the chia seeds also helps your body to be 50% better at burning calories, so burn that fat away with chia seeds!

Put these ingredients in a blender and puree until smooth:

This smoothie was really good!

We left our Vitamix blender going on high for 30 seconds to pulverize the seeds, and it still came out thick and creamy.

This smoothie tasted great too, like kiwi ice cream.

My daughter said that she really wants to make it again someday. 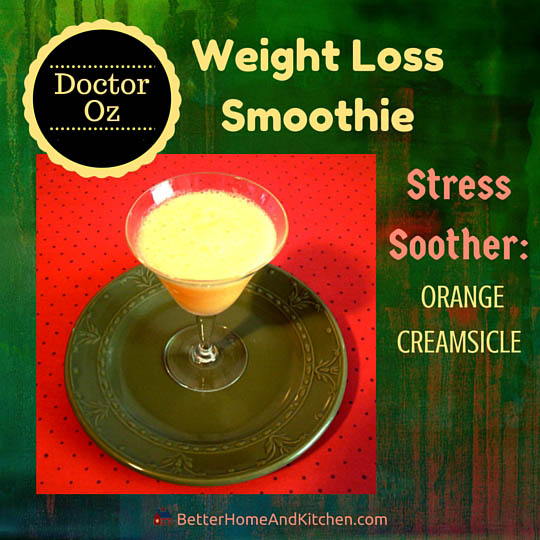 The smoothie I’m about to show you how to make is filled with oranges and cantaloupe, and therefore filled with Vitamin C.

Since there’s a lot of Vitamin C, this smoothie can reduce a stress hormone called cortisol by 300%. And not only will it fight your stress, but it will also help your body burn away fat.

This smoothie certainly looks like it’s a good idea to stock up on those citrus fruits now.

Puree the following ingredients in your blender until the mixture is smooth:

This smoothie turned out a little bland, but it was still sweet.

I hope this smoothie turns out better for you! 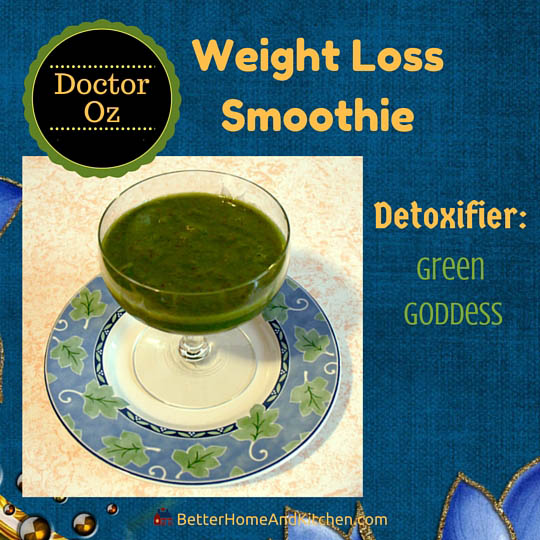 Apparently, Dr. Oz drinks a green smoothie every day, and we probably should too.

Green drinks have a lot of chlorophyll, which. . . seems a little obvious—considering green smoothies are mostly made of green plants.

A less-obvious attribute of chlorophyll is that it lowers toxins that slow down your metabolism by 50% in only five days, and that’s as good a reason as any to drink a lot of greens.

Spinach has glutathione, which is very detoxifying for the liver.”

So let’s speed up that metabolism and clean up that liver!

Throw these ingredients in your blender and blend until smooth:

If you blended up a salad, that’s the kind of taste you’d get from this smoothie.

The flavor of the ginger and the parsley come out really strong, with just a hint of the apple.

I didn’t really like this smoothie, and my daughter refused to drink any of it once she had a taste. 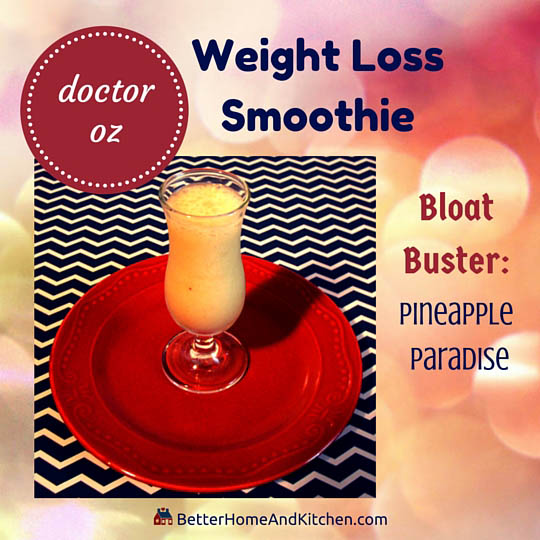 About this smoothie, Dr. Oz says:

This purifying beverage contains pineapple, which has bromelain to aid digestion.

Bromelain is an enzyme that breaks up undigested protein molecules in the gastro-intestinal tract, so it keeps you from getting gassy and bloated.

So what are we waiting for? Let’s try out this drink!

These ingredients are what you should put into your blender to puree until smooth:

I love this smoothie. It was very cool, refreshing, and sweet.

It reminded my daughter of a piña colada taste, but then she didn’t drink much more because she doesn’t really like piña colada.

However, I think it’s a great smoothie and definitely worth tasting. 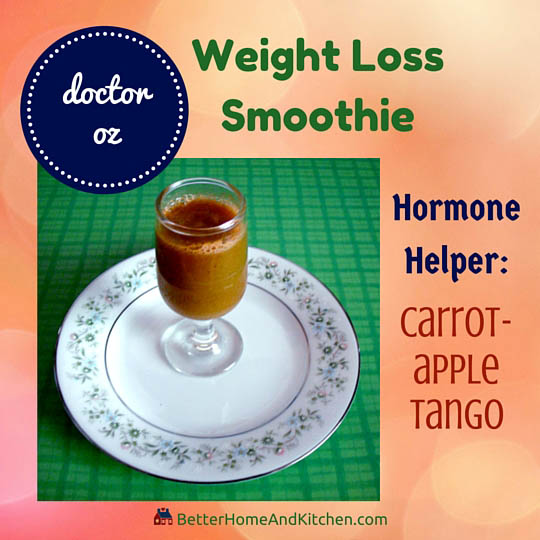 This next slimming smoothie has a healthy dose of flaxseed oil, which takes care of crazy estrogen levels—because of this, its flaxseed oil in this smoothie actually helps you with a lot of things.

Flaxseed oil has natural plant estrogens that steady your hormones and reduce the many symptoms that come from fluctuating estrogen levels by 57%. It’s  Dr. Oz’s remedy for estrogen fluctuations.

Puree these ingredients in a blender until smooth:

This smoothie just tasted like apple sauce with carrots and cucumbers in it. . . like salad with apples?

It was an okay smoothie; it wasn’t the most terrible drink ever, but it could have been better. 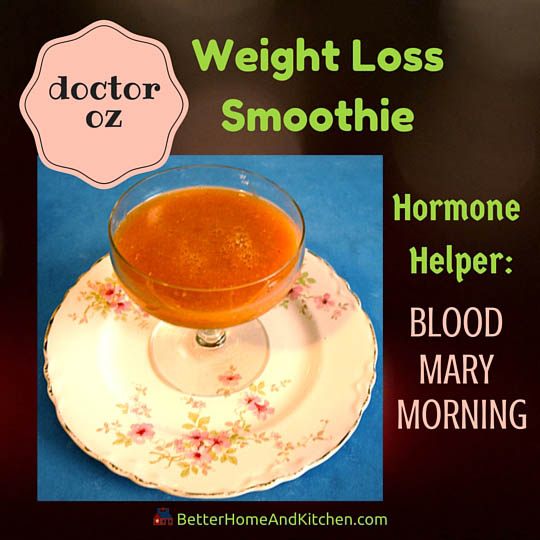 Although this smoothie isn’t necessarily on the sweet side, it still has two great ingredients for helping you to slim down.

First, the tomato that works against inflammation, and second, the cayenne pepper that helps you lose weight.

About 20 different fat-burning proteins are turned on when you [drink] spices like this. You’ll continue to burn off calories for 30 minutes.

So even though this drink unlike the other sweet treats on our list, it still carries the same slimming-down properties that we’re looking for.

Put these ingredients in a blender and puree until smooth:

My daughter and I were apprehensive to consume this smoothie as a drink, so we opted for getting out some chips and trying it as a salsa — this is a very smooth salsa.

I thought it was very spicy, but my daughter didn’t really think so.

This smoothie didn’t really suit our taste buds, but perhaps anyone reading may want to try it and see.

After a couple of minutes — after sipping just 2 tablespoons of this “concoction” I was sweating! It seemed like I had a 5-minute exercise. It’s really a torcher!. . . Not a TORTURE! 🙂 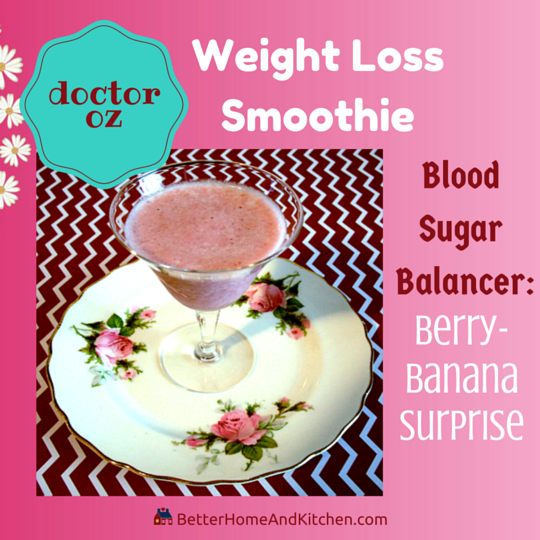 If you think whey protein is good for weight loss, then Dr. Oz will back you up.

The more I look at the role of protein in losing weight, the more I think it’s essential.

Specifically, whey protein has a certain amino acid that will turn your muscle cells into sugar-burning machines. One study has shown that this property of whey protein helped to improve blood-sugar levels by 96%.

Puree the following ingredients in your blender until the mixture is smooth:

What’s really good about this smoothie is that you can’t taste the radishes at all!

. . . However, the taste of the vanilla flavor in  whey protein is overwhelming, so if you want your smoothie to taste good, choose a nice whey protein flavor! We used Whey Factors Natural French Vanilla Flavor (Natural Factors).

Dr. Oz’s weight loss smoothies are packed with nutrients and hopefully they will help you slim down and make you feel great about yourself.